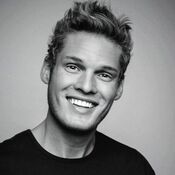 Nick Sales is the owner of Aevium Films, a video company that specializes in creating high quality content using some of the best video equipment the world has to offer. Nick's videos have passed over 500 million views on YouTube and he's had the privilege of working with some of the best artists, musicians and YouTubers in the world. His goal is to create content that not only entertains, but also inspires. Nick is also a team member and speaker for Save the Kids whose mission is to raise awareness of the harmful effects smart phones and social media have on children and families.​

SPARK is a contemporary Christian vocal group originally formed from singers discovered at Vocal Sport. This high-spirited group has entertained thousands at concerts, conferences, and festivals with their upbeat inspirational music that appeals to all ages. SPARK is excited to welcome all the 2022 contestants!

Angelina Whitehead has been involved in producing the Vocal Sport competition from the beginning. In addition, she is a founding member and the creative director and co-producer of SPARK. Besides show business, Angelina loves photography (see www.heycanitakeyourpicture.com) and helping people see the good in themselves. ​

Check Out These Amazing Sponsors!

Meet many of our amazing sponsors at the Meet & Greet booths before and after the competition! Some sponsors will be offering prizes! (See prizes)

McKay Crockett has guest-hosted and talent-scouted at Vocal Sport since the very beginning in 2012. Over the years, his list of credentials in the entertainment industry has become quite extensive! McKay is an Emmy award-winning music director, music producer, arranger, and performance coach from Salt Lake City, Utah. As one of the most sought after creative minds in Utah, his style and innovative approach to music has influenced hundreds of millions across the world. McKay's clients have appeared on every major television network in the U.S., and have toured stages on nearly every continent. ​While being well-versed in various styles and entertainment genres, McKay is world-renowned for his work in vocal music. In 2017 he won an Emmy award from the National Academy of Television Arts & Sciences, Rocky Mountain Chapter for his role as Music Director of the Christmas Under the Stars television program. McKay has worked with and arranged for Walt Disney Entertainment, arranging for nighttime spectaculars at both Walt Disney World and Disney Shanghai. He's worked with artists including Kristin Chenoweth, Colbie Caillat, Gladys Knight, Brian Stokes Mitchell, David Archuleta, Ben Rector, and many more. In 2011, McKay appeared on NBC's The Sing-Off with the internationally acclaimed vocal group Vocal Point, sharing the stage with artists Sara Bareilles, Ben Folds, and Shawn Stockman (Boyz II Men). As an a cappella producer, McKay's music has reached #1 on multiple Billboard charts, and iTunes charts.  He has also won several Contemporary A Capella Recording Awards (CARA), including Best Religious Album, Best Male Collegiate Album, Best Classical Song, and been nominated for many others. The CARA are comparable to the Grammy Awards of A cappella music. At the age of 24, McKay joined the music faculty at Brigham Young University, where he is now the artistic mastermind behind the studio albums, music videos, and concert touring of Vocal Point. McKay has a Bachelor's Degree in Commercial Music from BYU, and he continues to write, arrange, and produce music and content for artists around the world.
***Check out ReMix Vocal Academy, the highly-popular summer vocal camps at BYU, directed by McKay Crockett!

Marshall and Michelle Moore are the owners and co-directors of Zions Indie Film Fest (formerly the LDS Film Festival). Together they have over 45 years of combined film industry experience and are extremely passionate about helping connect filmmakers, friends and audiences alike. Michelle is a tenacious and experienced film publicist and brand specialist. Her creative PR thinking and strong relationships with the media have made her a valuable asset to many theatrical release campaigns. In the last decade Michelle has worked on over 30 movies with filmmakers and actors from around the world. She is the owner/operator of Moore PR Group and with the help of her talented team they work year-round on media campaigns, movie premieres, and special events. Marshall has an impressive filmography that started in Los Angeles and ultimately brought him to Utah working on the TV mini-series, The Stand in 1994. He worked full-time as a location manager for 20 years before joining the staff of The Utah Film Commission and was subsequently named Director by Governor Jon Huntsman Jr. in 2007 where he stayed until 2014. Marshall is currently the VP of Operations and Marketing at Utah Film Studios in Park City, Utah which was home to the Paramount Network television series Yellowstone for 3 seasons.

Landon Alley is the owner and chief audio engineer at Sound Bridge Studio in Lehi, Utah. He is excited to be scouting the amazing talent at Vocal Sport 2022 for future studio projects and referrals! As a musician, performer, and recording artist, Landon understands the process of making a great record. In addition to his clientele of singer-songwriters, he’s worked in a wide variety of genres including pop, rock, indie, R&B, country, a cappella, and orchestral. He has also worked as a composer, with works featured in national TV ads and live theatre productions. Sound Bridge Studio is designed to give singer-songwriters everything they need to turn phone memos into professional records. This is the perfect place for artists and bands who want to create a rich, clean, acoustic sound, collaborate with phenomenal session musicians and engineers, and gain studio experience in a comfortable environment.

More VIP'S & Judges to be Announced

Below are some of the influential directors, producers, casting agents, and talent scouts that have been affiliated with past Vocal Sport competitions. Through referrals from Vocal Sport, these VIP's have provided countless professional opportunities to contestants and winners. In addition, casting agents from national TV talent shows regularly contacted Vocal Sport to recruit talent. ​They have selected many singers from referrals and the Vocal Sport YouTube channel to attend special auditions. As a result,  singers have been featured on television and more. See Success Stories.

Melissa Cannon Johnson teamed up with Vocal Sport as the director of her own modeling agency. Since then, she's expanded her horizons to include many other artistic and business ventures. As a "serial entrepreneur," Melissa has never shied away from a challenge, and that shows in her overall success. Currently, she is a top leader at dōTERRA, a multi-level marketing company based in Utah that specializes in essential oils. In addition to being a leader with dōTERRA, Melissa has also found success in filmmaking with Infinity Rising, specializing in production, screenwriting, short films, and music videos. She has produced several films and is grateful and excited for every opportunity to share her creativity. ​Melissa’s husband, Brad Johnson, is also a film producer, actor, and podcaster.

​​Bart Olson is the Music Director of Shadow Mountain Records based in Salt Lake City [Shadow Mountain Records and Highway Records are record labels of Desert Book]. Bart has been performing professionally for over 20 years. Early in his career he was signed to Capitol Records and toured all over the US performing for audiences ranging from a few hundred to 40,000. He has won top awards from international jazz festivals. He is also a sought after studio drummer and has performed on recordings for hundreds of songwriters and bands, as well as Disney, Epic Games, and Hollywood movie soundtracks. Under Bart’s direction, Vocal Sport winner Madilyn Paige released her self-titled EP with Highway Records.

Nik Day is a singer and producer and works for the LDS Church music department. He oversees the annual Mutual Theme album, which he writes with LDS youth. Many of his songs are also featured on recent EFY albums. Nik released an album album titled Miracle with Shadow Mountain Records and has been a presenter for Deseret Book's nationwide Time Out For Women events. Nik has a degree in Media Music from Brigham Young University and has written for local groups such as Hudson Lights, Beyond 5 and The Strike. Music has always been a part of Nik's life experiences. He recorded his first album, Interesting Shade of Blue, named for the jazz and blues influences of his own unique writing style. Nik’s YouTube channel features music videos that have received up to half a million views each. ​

Debra Bonner is the Master Vocal Coach and Managing Director for Your True Voice, a program that trains singers to discover their “true voice.” This unparalleled program teaches individuals to sing naturally while liberating them from self-limiting behavior and negative emotions that are keeping them from their potential. Debra has been an associate to two of the most celebrated vocal pedagogues of the twentieth century, Richard Miller for nine years and Seth Riggs for over fifteen years. She holds a Master's Degree in Vocal Performance from the University of Michigan. Debra’s studios have trained Grammy and Tony Award winners. She was the vocal coach for World Peace One, an organization of superstars dedicated to promoting world peace. Debra sang and recorded as guest soloist with the Mormon Tabernacle Choir and has been featured on gospel, jazz and classical recordings. She has performed extensively worldwide. Debra and Your True Voice are seeking great talent for the purpose of developing outstanding singers and voice teachers. ​
ENTER HERE